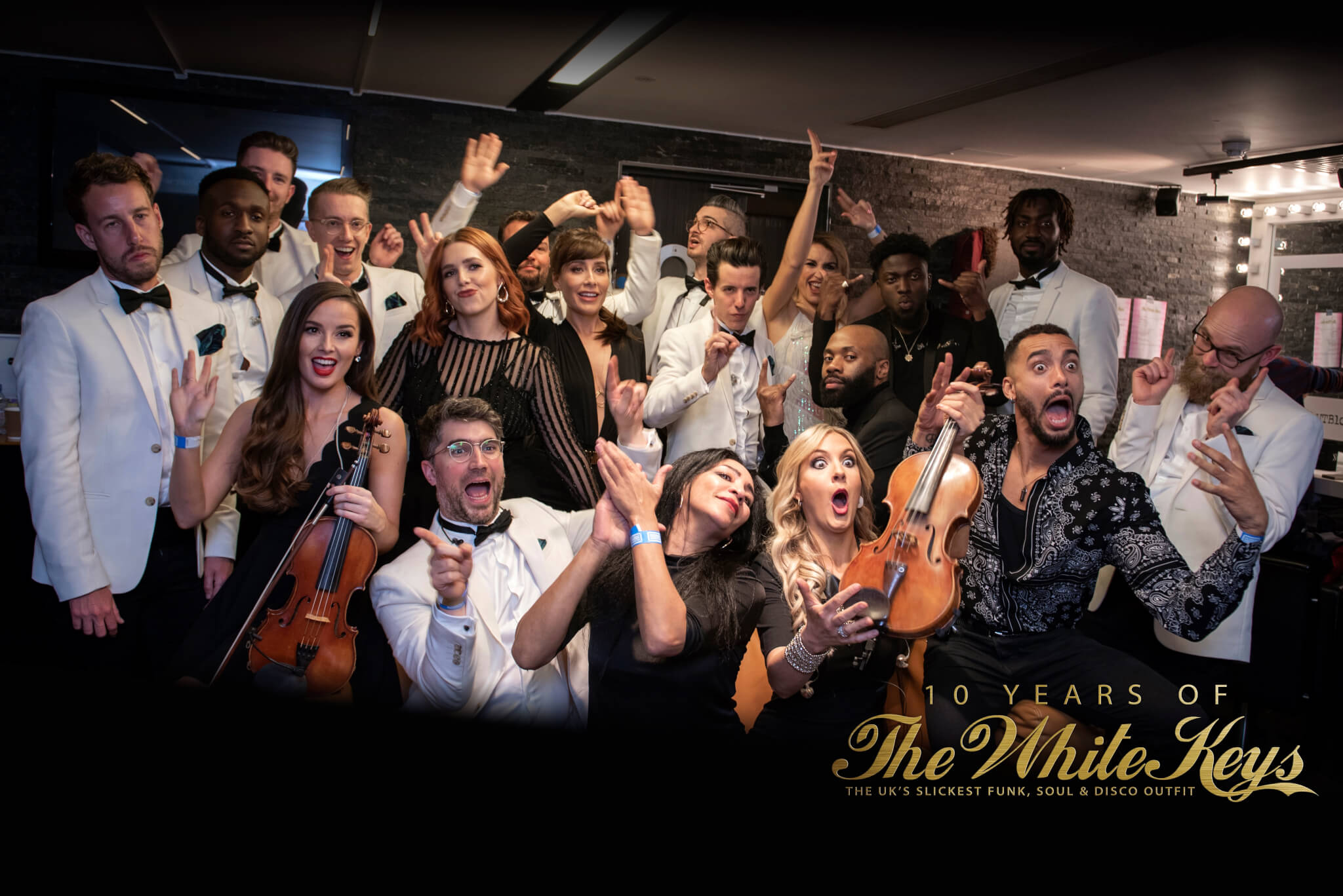 The White Keys are a transatlantic collective of some of London’s most exciting and in demand session musicians and vocalists.

Experts in entertainment, the band have been burning up dance-floors, and astounding audiences across the UK since 2009 with their unique renditions of all the greatest Funk, Soul, Disco & Pop classics.

Now in demand worldwide at over 150 weddings & parties per year, The White Keys are renowned for their outstanding talent and high-octane performances, and are one of the busiest and most highly acclaimed groups in the events entertainment industry today.

Scroll down or click below to read more about what we do, or head straight to our VIDEO page to see us live in action!

Combining some of London’s Top DJs with our energetic vocalists, percussionists and sax players, TWK are proud to present ‘TWK DJ Live’. Based on the band, with endless set lists, our lines up are fully interactive and can be configured into a duo, trio, quartet, quintet and more!

We can provide anything from Solo DJs, to 3 – 6 piece DJ Live bands, to our show-stopping 14 piece tribute to Pete Tong & The Heritage Orchestra.

Read on to find out more…

For Wedding Ceremonies, Garden Parties, Drinks Receptions and more, read on to find out about our unplugged options for any occasion.

We’ve got you covered with everything from String Quartets to Cocktail Jazz bands, Roaming Duos & even Gospel Choirs. Click below to find out more!

Like what you see on this site? We have one of the best in-house media teams in London, and like us, they are available for event hire worldwide! If you are interested in using our guys for your event Photography or Videography needs, read on!

…Or maybe you want what goes on in front of the camera to have some serious wow factor? We are also in partnership with one of the most in demand suppliers of Dance-floors, Staging & Lighting design in London.  Click below to see how our team can make your dream event become a reality!

With their roots in some of the UK’s finest conservatoires, including The Royal Academy of Music, LCoM & Trinity Laban; all members of The White Keys now balance a busy full-time career performing with the band, alongside collectively working with some of the biggest names in the UK Top 40, The West End and on Television. The most recent of CV credits including work with Tom Walker, Nao, Jessie Ware, Jess Glynne, Clean Bandit,  Stormzy, Jessie J, Jamie Cullum & Wilkinson; appearances on Later… with Jools Holland, Strictly & X Factor; as well as show credits including The Lion King, Wicked & Motown The Musical…to name but a few!

With over 1000 successful events under their belt, The White Keys are masters of their craft. Combine this with a wealth of experience with only the best suppliers and talent in the industry and making your dream event a reality has become their second nature. Providing everything from the all out 12 & 14 Piece Party Band to our compact 6 Piece Band to elegant harpists, pianists and string quartets, to soulful lounge singers and swinging jazz ensembles. Whatever your vision there are quite simply no limits…The White Keys can do it all!